The Problem With Traffic

The problem with traffic is that it effects us all. 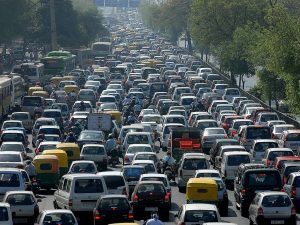 In the UK, the average motorist will spend on average 32 hours a year stuck in traffic. In the US that increases to 42 hours a year, and it’s getting worse. The impact this has on small businesses is immense.

A small business quickly gains a reputation for being unreliable if it cannot service its customers in a timely manner, and that damage can be very hard to repair.

I’m not going to say that me:now is going to solve the traffic problem, (trust me, after spending the past week in New York, I wish it could) but it can help mobile businesses work smarter.

The owner was my driver, and he was telling me how only five years previously he did virtually the same number of airport drops/pickups with half the drivers.

Today, he needs twice the number of drivers because they spend so much time in traffic.

To maintain his business’ reputation of reliability, he had to double his costs, without the benefit of increasing the number of jobs they can do.

Thanks to a friend’s recommendation, I have used his company for the last few years, and they are always reliable – that’s why I always go back to his business every time I go to the airport.

For years his company had always scheduled the drivers around individual customers needs.

Whenever I booked, I usually got the owner, who would collect me from my house and take me to the airport, and if another customer happened to be coming back near that time he’d pick them up.

Otherwise, he’d return without a passenger or wait 3-4 hours to collect another pre-scheduled customer.

More often than not, the driver taking or picking me up would do one of those trips with no-one else in the car.

If I’m honest, I thought he was just humouring me. I’d sit in the car and explain how the business works, while he smiled and nodded, but never really engaged with the conversation.

But this last journey was different. I got into the car and he immediately asked when the me:now app would be available.

I was taken by surprise, but I was happy to tell him that it was only a month away.

He wants the app, because he wants to work smarter. Having paying customers in their cars for both legs of the journey is the ultimate aim. By using me:now his company can advertise that a car will be either going to or returning from a specific airport at a given time.

If the charge for taking someone to Heathrow Airport is £95, then by advertising that he has drivers available, he has a greater chance of making the same amount of money for the return journey.

The same basic principle can be applied to the mobile plumber, mobile hairdresser or most mobile service businesses.

If your customer (current or potential) know that you’re available and in their area, you have a greater chance of satisfying their need for your service.

Before a customer starts a search for a service, they know what they want, where they want it and – importantly – when they want it.

And that’s where me:now is going to be a gamechanger for small businesses.

Share on TwitterShare on FacebookShare on LinkedInShare on Email

Find what you need...

Where you want it...

Is your business struggling post-lockdown? Our app can help.

An end to hunting for home delivery slots?